“Reading gives you the ability to reach higher ground. A world of possibilities awaits you. Keep turning the page.” 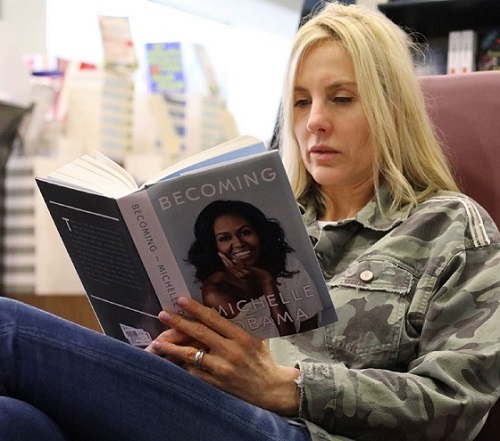 Adventures of an adventure author

“Farm poor” is how Desiree Gullan describes her early years, growing up in a rustic part of South Africa, with financial nomads for parents. Not the cool hipster-type financial nomads working from laptops in exotic locations, the kind of nomads who couldn’t afford to pay rent, so they constantly shipped their kids to a new house before the landlords showed up.

Desiree’s life-defining moment hit hard at the age of 13 when she arrived home from school with a friend to a barren home. No bread, no milk, no lunch – nothing but empty cupboards. The combination of embarrassment and hunger created a painful, yet foundational moment that would shape Desiree’s future. She responded by talking her way into a job, waiting on tables, which later funded her college education.

Her hunger was satisfied with words, her safety in the pages of books. She could vanish into worlds far away from her reality, and eventually she began exploring her own mind through writing. Everyone has a book that changed their life and Desiree’s was Irving Stone’s, The Passions of the Mind. Stone’s biography on Sigmund Freud, ignited Gullan’s quest to understand the conscious and unconscious mind, and ultimately lead her to becoming a writer. “The book assaulted me, dragged me in by the collar, and didn’t let me go,” says Gullan, explaining that moment when she realised she would one day be an author.

With the destination clear in her mind, but not in sight, Gullan completed degrees in psychology and literature, followed by marketing and communications, which lead her into ad-land. Work imitated life as she grew up the hard way as a copywriter at Ogilvy, TBWA and FCB before launching her own advertising agency in 2006.

While excellent for sharpening her writing skills, the corporate world left Gullan spiritually starved. She continued on her search to find meaning and make sense of the world. She travelled extensively, sought answers from Shaman, took natural medicine, hiked to peaks higher than Everest base camp in the Himalaya and just about every mountain range in Southern Africa, camped with indigenous tribes in the jungles of Borneo.

Her discovery of meditation was another turning point, as Gullan realised the journey to peace was an inward one. She spent weeks in silent retreats, travelled through India and practiced yoga at the feet of her guru, the late BKS Iyengar.

“All paths take you up the same mountain,” Gullan believes as she has settled into a life rich with meaning and purpose and actualising her true passion – exploding stories into existence. Not just any stories, but stories that add value, illuminate the path of meaning, and ignite the spirit, all while entertaining and delighting her readers. The Great Way Series, Gullan’s debut series of adult fiction is best described as epic international adventure with a spiritual heart and it’s destined to take readers on a journey they will never forget.